Bangkok braces for another high tide as governor apologizes 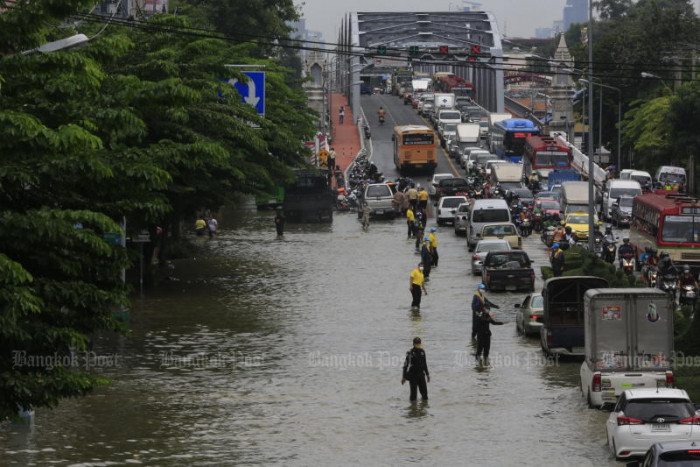 Bangkok braces for another high tide as governor apologizes

Traffic comes to a virtual halt at Krungthep Bridge as the Chao Phraya River overflows on Monday. (Photo: Pornprom Satrabhaya)

Residents of Bangkok’s riverside neighborhoods are suffering from flooding and are expected to prepare for another high tide on Tuesday.

Floods were also reported in the neighboring provinces of Samut Prakan, Chachoengsao and Nonthaburi.

The Bangkok Metropolitan Administration (BMA) said the districts hardest hit by the floods were Bang Phlad, Samphanthawong, Yannawa, Thon Buri and Phra Khanong. All are located on the banks of the Chao Phraya River which crosses the capital.

Videos and photos on social media, including Twitter, showed flooded roads in many parts of the capital, forcing pedestrians to wade through water on Monday morning. Many took to social media platforms to vent their frustration over the issue.

“Bangkok has seen several governors but nothing changes,” tweeted a Twitter account under the name “Beauty like a nature.” “Some governors came for photo ops and then left.”

The Navy Hydrographic Service urged people to take precautions as Tuesday’s high tide would reach 1.31 meters at 11.26am.

The actual water level was much higher than the department’s prediction of 1.20 meters, he said, adding that the predictions were based on astronomy and made a year in advance.

Bangkok Governor Aswin Kwanmuang acknowledged that the BMA underestimated water levels at high tide and issued an apology for the flooding.

“BMA would like to apologize to everyone affected by the overflow of the Chao Phraya River today,” he wrote on his Facebook page.