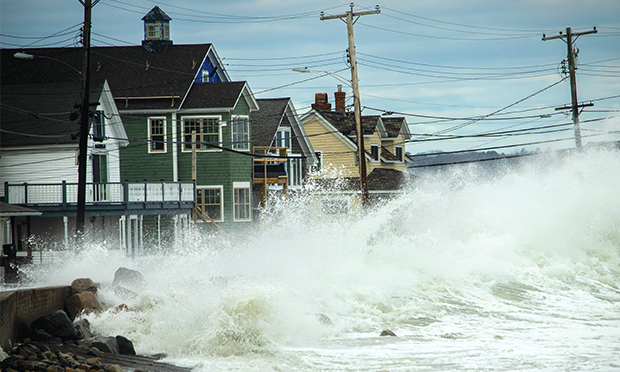 The standard ISO forms for property, homeowner’s and dwelling coverage each contain a water exclusion that extends to exclude losses caused by storm surges. It appears that recent hurricane tracks have extended further inland and resulted in an inordinate amount of flood loss. How do you determine if a loss in an inland area is due to rainwater flooding or storm surge?

Of all the damage caused by hurricanes, storm surges pose the greatest threat to life and property along the coast. Hurricanes produce strong, powerful winds, but it’s actually the water that does the most damage, accounting for nearly 90% of fatalities, about half of which are due to storm surges. The size and force of a storm surge can break down barriers such as dunes, levees and barricades and sweep across an area, sweeping away everything in its path, flooding communities and leaving death and devastation in its wake.

Storm surge is an indefinite term in insurance policies, so what is a storm surge?

According to the National Oceanic and Atmospheric Administration (NOAA), the definition of a storm surge is as follows: Storm surge is the abnormal rise in sea water level during a storm, measured as the height of water above the expected normal astronomical tide. The surge is caused primarily by winds from a storm pushing water toward the shore. The amplitude of the storm surge at a given location depends on the orientation of the coastline with the path of the storm; the intensity, size and speed of the storm; and local bathymetry.

Put simply, when a hurricane bridges the gap between sea and land, its winds push a huge volume of ocean water ashore, which is a storm surge.

Storm surge begins over the open ocean when strong hurricane winds push ocean waters, causing water to pool beneath the storm. As the winds swirl around the storm, seawater is pushed into a mound in the center of the storm. The height and extent of this pile of water depends on the size and strength of the hurricane. The faster the wind speed, the more water can accumulate. At the center of a hurricane, atmospheric pressure is low. Low atmospheric pressure causes a slight bulge in the ocean, which adds to the pile of water that causes the storm surge, allowing about 5% of the mound.

The time of the tide is a big factor in the impact a storm surge will have upon landfall. At high tide the water is already high, so if the landfall occurs at high tide this will cause the surge to reach higher levels and push the water further inland. That’s what happened when Hurricane Isaias hit Myrtle Beach, South Carolina in August, when the storm surge was only four feet, but the water level was more than ten feet above normal.

However, according to NOAA, a storm surge should not be confused with a storm surge. A storm tide is defined as the rise in water level due to the combination of storm tide and astronomical tide. Even though rising water levels can cause extreme flooding in coastal areas when a storm surge coincides with normal high tides and can reach up to 20 feet or more. Storm surge is created by water driven by the force of winds moving cyclonically around the storm.

Then there is also a growing concern about sea level rise and its influence on storm surges. As water warms, it expands, so that when global temperatures rise, sea levels rise. The melting of ice caps and glaciers adds to this. Together, they raise the ocean floor height, which means that with higher elevation, the hurricane’s storm surge can bring water further inland.

Another contributing factor is the depth or shallowness of the seabed; for example, if the seabed is gradually moving away from the coast, there is a greater likelihood of a higher storm surge than if there is a steep landfall into the sea. Compare this with Louisiana and Miami – the storm surge will be greater in Louisiana than in Miami because the seabed in Louisiana is wide with a shallow, gradual slope, while in Miami the seabed drops very rapidly.

The angle of the storm track also affects the wave; a hurricane that is heading straight for a coastline is more likely to cause a higher storm surge than a hurricane that strikes the coast at an oblique angle or moves parallel to the coast.

When does the water stop coming from the hurricane and become rainwater? Storm surge is not related to the amount of rain that falls in a storm. Based on past storm surge information, we can determine that normal rainwater, regardless of intensity, would not meet the definition of a storm surge. Once the storm moves inland, the wind no longer pushes water cyclonically across the ocean and it is no longer a storm surge. Instead, it is now a rainstorm, which could produce flooding.

Karen L. Sorrell, CPCU, ([email protected]) is an editor with FC&S Expert Cover Interpretation, the authority in the interpretation and analysis of insurance coverage for the P&C industry. It’s the resource that agents, brokers, risk managers, underwriters and adjusters rely on to research commercial and personal insurance coverage issues. To visit www.NationalUnderwriter.com for more information.