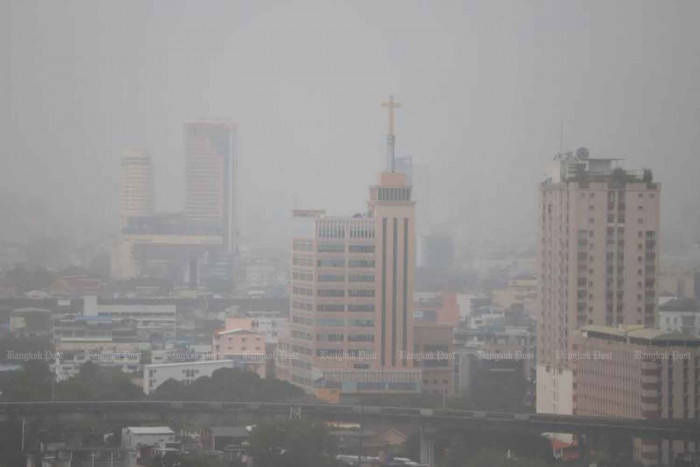 Rain is pouring down on Bangkok on Thursday evening. (Photo: Varuth Hirunyatheb)

Bangkok has raised its flood alert level with heavy rain expected to fall through Saturday, adding to a huge volume of runoff continuing to flow from upstream and high tide preventing floodwater drainage.

All major canals in the capital are full except for Klong Saen Saep which was nearly full on Thursday, city governor Chadchart Sittipunt said, adding that a trough is expected to bring more rain to the city.

Runoff from upstream areas measured up to 1,850 cubic meters per second on Thursday morning, further hampering attempts to drain excess water from the capital to the sea, he said.

Worse still, all of these negative factors coincided with a period of high tide that started on Wednesday and is expected to continue through Saturday, he said.

From Wednesday evening to Thursday morning, Lat Krabang district recorded the heaviest rainfall of 130 millimeters, which triggered flooding in communities near the Prawet Buri Rom canal, the main flood drainage route in eastern Bangkok, he said.

“All the major canals in the city are full except for Klong Saen Saep which is almost full as well, despite frantic attempts to drain excess water from the city,” he said.

One of the problems with the city’s drainage system is that the old drains are not capable of accommodating a level of rainfall as high as 170mm as was the case in Bang Khen district on Tuesday evening, a he declared.

This explains why Klong Lat Phrao and Khlong Prem Prachakon have been full ever since, he said. Bangkok is literally surrounded by areas with extremely high water levels in rivers and canals, which are blocking the capital’s floodwater drainage, he said.