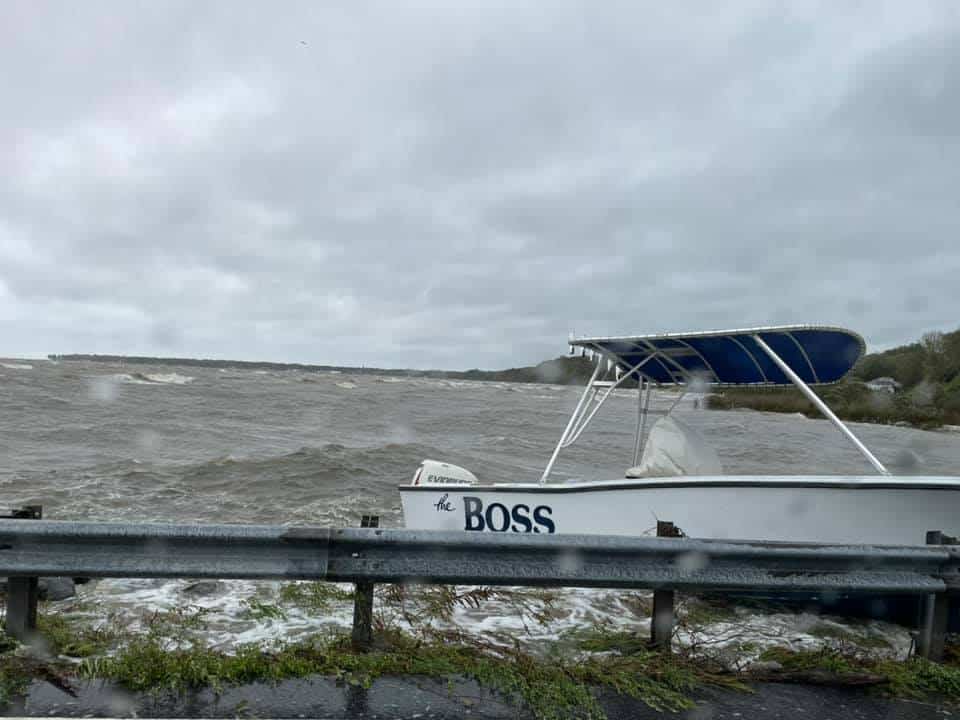 By Cheryl Costello and Kathy Knotts

Not since Hurricane Isabel has the Chesapeake Country experienced such disruptive flooding. From Thursday to Sunday, low pressure and persistent onshore winds caused record high water levels in some places and near record highs in others.

The Potomac River and the Solomon Islands all received unprecedented flooding. Annapolis had its fourth-highest on record, and southwest Washington, DC, and Alexandria, Virginia had their third-highest. The area has seen measures ranging from 4.8 to over 8 feet of flooding, according to the National Weather Service.

the CBM Bay Weekly The community faced high waters from Pasadena to North Beach, cutting some people from their homes and forcing some businesses to temporarily close.

We were in some of the hardest hit areas and asked leaders: what is being done to combat future coastal flooding?

In Annapolis, wind, rain and tidal waves rocked sailboats and waves crashed into the docks of Back Creek. Eastport resident Ben Lyon came over to check on some friends’ boats to make sure they were holding up in the ever-higher water. “You give the lines a bit more slack so the boat can float higher when the swell pushes it up, and that way it’s not going to come loose, in theory. That’s basically all you can do,” he told us.

During a three-day period of extremely high tides, the Alex Haley memorial sculpture was swimming and the water level reached 4.9 feet above normal.

Sandbags, offered Thursday by the city and piled up at the doors of shops and restaurants, were taxed to the maximum and water slipped inside the buildings. Governor Larry Hogan has declared a state of emergency for Annapolis and other parts of Maryland. Anne Arundel County and the City of Annapolis moved quickly to organize a system for people to report damage and apply for relief funds.

Maryland’s capital wasn’t alone in experiencing crippling flooding. In Deale, Sydney Marshall couldn’t reach her house near Skipper’s Pier restaurant, so her father Ty Marshall stepped in (in his waders) to pull her into the boat. At Happy Harbor, patrons took the opportunity to grab a drink at the dockside bar sitting in knee-deep water.

In North Beach, water crashed onto the boardwalk and destroyed parts of it. Segments of the promenade remain closed to the public, including boat launches along the pier and a section between Hatch’s Corner and 7and Street. At Bayside Beach in Pasadena, the pier was difficult to find when boat owners went to check on their property.

In Galesville, the staff and owners of the Pirate’s Cove restaurant hoped they were ready for the onset of the water. “We’ve been there before,” says co-owner Anthony Clarke. “We had experience with Isabel, so we knew where the flood points were in the building.”

Clarke staff moved furniture from the dock bar and dining areas on Thursday evening and unplugged and moved as much equipment as possible. The water always came. “We were underwater from the first tide on Friday to low tide on Sunday. About 95% of our interior was under water, from 4 to 12 or 15 inches.

The restaurant was able to reopen the quay bar on Sunday noon after being closed all day Friday and Saturday. “When the tide goes out, it takes all the water with it,” Clarke said, “so you don’t have to pump it all out like you would in your basement. Once we’ve washed the debris under pressure and the sun came out, everything dried up pretty quickly.

Clarke says the restaurant relies on its sous chef Bill Parkinson who has worked in the building for more than 40 years. “He’s been through a number of hurricanes,” Clarke said. “He is our weather guru so we trust his opinion and he is our hero in all of this. He has so much knowledge about the area and how weather and water affect our building. He was there from start to finish, checking the water levels and giving us estimates of what to expect. He knew Thursday we were going to be hit. We’re grateful to him.”

Anne Arundel County Executive Steuart Pittman is already working to prevent future disasters like this. “In the long term, we have to prepare more and more for this, which is why we have created the Resilience Authority in Anne Arundel County. We are in the process of hiring a director and staff for that so that we can fund some of the infrastructure improvements in some communities. Shady Side, for example, has a lot of communities that are very low,” Pittman told us at the height of the flood. “We have to raise some of these roads to protect the community. And here at City Dock. They are raising City Dock to be able to face the future.

Bill O’Leary, a volunteer with the City of Annapolis Environmental Commission, advised on needed improvements.

“The installation of check valves has definitely been a big help. But unfortunately what is going to be necessary is that those bulkheads all around the inner harbor area are going to have to be raised. And there are several low points in the port.

Jeff Holland, who runs patrol boats for the Annapolis Harbor Master, notes the increased frequency of coastal flooding. “Twenty years ago we had these nuisance tides three to four days a year, and now it’s 30 to 40 days a year.” It is 30 to 40 days that low altitude companies are at risk.

The Maritime Museum was one of the hardest hit places in Annapolis during this flood. Museum President Alice Estrada told us that 12 inches of water found its way inside the museum and they have closed indefinitely, saying “widespread flooding in the area has devastated the Maritime Museum of Annapolis”.

“We think we’ve protected the exhibits, but we have professionals cleaning up right now and they’ll assess the damage,” Estrada says.

When CBM Bay Weekly Checked in with Estrada again earlier this week, she said a final damage assessment has yet to be made. “Offices, desks, computer equipment, appliances in our catering kitchen and important supplies were destroyed.”

Estrada said staff tried to prepare for floodwater flooding. “We prepared with sandbags but that was woefully insufficient for this storm. We moved all of our exhibits, which were designed to be mobile for precisely this reason, to higher ground.”

The museum had not seen flooding of this nature since Hurricane Isabel, but deals with nuisance flooding throughout the year. “The impacts of harmful flooding are minimal because we have gone to such great lengths to modify our historic building in a process known as waterproofing. When we started designing our new exhibits, flooding was a big concern. The exhibits were tailor-made to meet the needs of our (often humid) space,” says curator Caitlin Swaim.

“The most basic explanation for the modifications is that all screens are on raised platforms of 12 inches or more to allow flooding with minimal impact and minimal preparation on the part of staff. Parts that are not elevated are designed to be mobile and can be transported from space for extremely high tides like what we saw this weekend,” says Swaim.

Estrada hopes the museum will reopen to the public by this weekend.

Grants of up to $50,000 are available through the VOLT Disaster Recovery Relief program, managed by Anne Arundel Economic Development Corp. 30 can claim the grant for any legitimate business expense. This includes physical repairs to assets, replacement of equipment, loss of revenue due to closure, replacement of damaged inventory, and working capital needed to start and operate the business.

Eligible applicants include businesses that align with the US Small Business Administration’s small business categories, as defined by business size; are in good standing with the State of Maryland; and have a brick and mortar location in the state. Applicants will need a VOLT application, a copy of 2019 business tax returns (or Schedule C), a statement listing all damages including details of loss of income, a budget detailing the use of grant proceeds and a completed W-9. Claimants will need to be available for an on-site visit to examine the damage to the property. Find the app: aaedc.org/business/financing-and-tax-credits/volt-disaster-recovery-program/.