Low tide reveals the ruins of an ancient port near Knidos 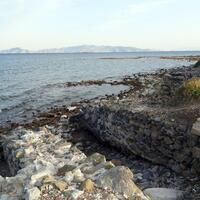 Low tide reveals the ruins of an ancient port near Knidos

Remains of an ancient port in the Aegean province of Datça district in Muğla were unearthed due to the drop in water levels resulting from a low tide.

The ancient port, believed to be part of the 2,600-year-old ancient city of Knidos, became visible following the drop in water level in the sea.

Small islets have also formed beyond the port, which is located in a narrow bay, due to the water abstraction of up to 30 meters.

Necati Özacar, a 34-year-old local fisherman, said he had come to the area where the waters receded to fish but was surprised when he saw the ruins.

“It was a very amazing sight. Normally there was sea water up to where we are now,” he told a reporter while pointing to the traces of moisture on the sand.

The city of Knidos is considered a historical gem that attracts thousands of tourists to the Datca district in southwestern Turkey every year.

The ancient city has stood the test of time remarkably well, with magnificent structures, a column-lined street, an agora, ancient theaters and ports.

Founded by Greek settlers, Knidos became an important cultural and political center after the fifth century BC due to its position as a commercial hub in the region.

The city was also famous for its association with Aphrodite and for its famous statue of the goddess, sculpted by Praxiteles of Athens.