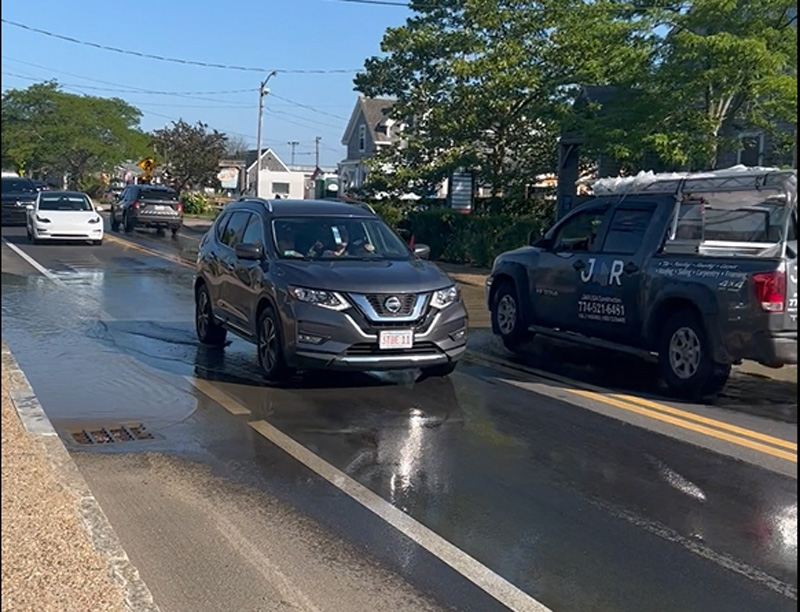 The National Oceanic and Atmospheric Administration (NOAA) announced at a recent press conference that it expects higher frequencies of high tide flooding in the United States. William Sweet, an oceanographer with NOAA’s National Ocean Service, said there was a “record” amount of tidal flooding, otherwise known as “nuisance” or “sunny day” flooding, across the United States during of the past year, enhanced by rising sea levels. Travelers on Beach Road in Vineyard Haven on Wednesday August 3 witnessed such a phenomenon, as city officials told The Times that the flood was not related to any city water pipes, but was instead “underground water”.

“It’s expected to continue into next year and into the foreseeable future,” Sweet said of the high tide flooding. He defined high tide flooding as when “the tides reach between one foot and three-quarters and two feet above the mean daily high tide, causing water to spill into streets or upwell storm drains”. Sweet said high-tide flooding that only happened during storms “decades ago” happens more frequently, even on days without “severe weather,” like full moon tides, or during changes wind and currents.

“Sea level impacts are happening now and increasing rapidly, making preparedness planning challenging,” Sweet said. However, he said the outlook for flood days at high tide can help policymakers better prepare their communities for these disruptive events. “This data can help communities plan where to place buildings and how to construct them to keep people safe. As cities, states, and federal governments, as well as the public, increasingly consider the impacts of coastal flooding and related hazards, NOAA’s National Ocean Service is the source for data and information authority on a wide range of risks. We are not just a data provider. Many of our employees and facilities are actually located in coastal areas, so we are a true partner at the center of the national conversation on sea level rise.”

Sea level rise isn’t the only climate-related phenomenon potentially impacting Martha’s Vineyard. From July 2021, the “wobble” of the moon is expected create higher high tides and lower low tides over the next two decades. For the time being, Sweet said, the lower low tides of the moon’s wobble “helped lift the gas pedal” for the floods.

Ben Robinson, a member of the Martha’s Vineyard Commission and the island’s climate change leader, told The Times that the island was preparing for rising sea levels and potential flooding. Some examples include working with the Center for Coastal Studies in Provincetown to study the storm tide lanesand the Seaport Economic Council grant that Chilmark received for replace and raise fishing piers at the port of Menemsha.

“We’re proactive about it,” Robinson said. Other considerations include what happens to structures in low-lying areas and near the island’s salt marshes (eg, placing structures on stilts, removing structures).

Martha’s Vineyard suffers flooding from coastal storms, heavy rainand northeast, but Robinson said high tides can also cause flooding in areas closer to the ocean. Edgartown’s Dock Street and Menemsha were previously flooded at high tide. Robinson also said he expects flooding on Friday August 12 and Saturday August 13, when an astronomical high tide is expected. On these days, NOAA forecasts indicate that Oak Bluffs experiences between 2.19 feet and 2.42 feet high tide, and Edgartown experiences between 2.12 feet and 2.93 feet high tide.

“If we think about our planning horizons from 2050 to 2070 and beyond, simple solutions along places like Tisbury’s waterfront shopping district will be exhausted,” Robinson said. “You can’t just raise your building and raise the land, because sea level rise would be so much that those solutions wouldn’t really succeed. We’re going to have to think more strategically about how much [we] retirement, what kind of things can survive in those areas, how much backfill do we need to put in to keep things dry.

Robinson said the consequences of climate change, such as melting glaciers in places like Greenland or Antarctica, and warming oceans, are contributing to sea level rise, albeit at slower rates. and different effects globally.