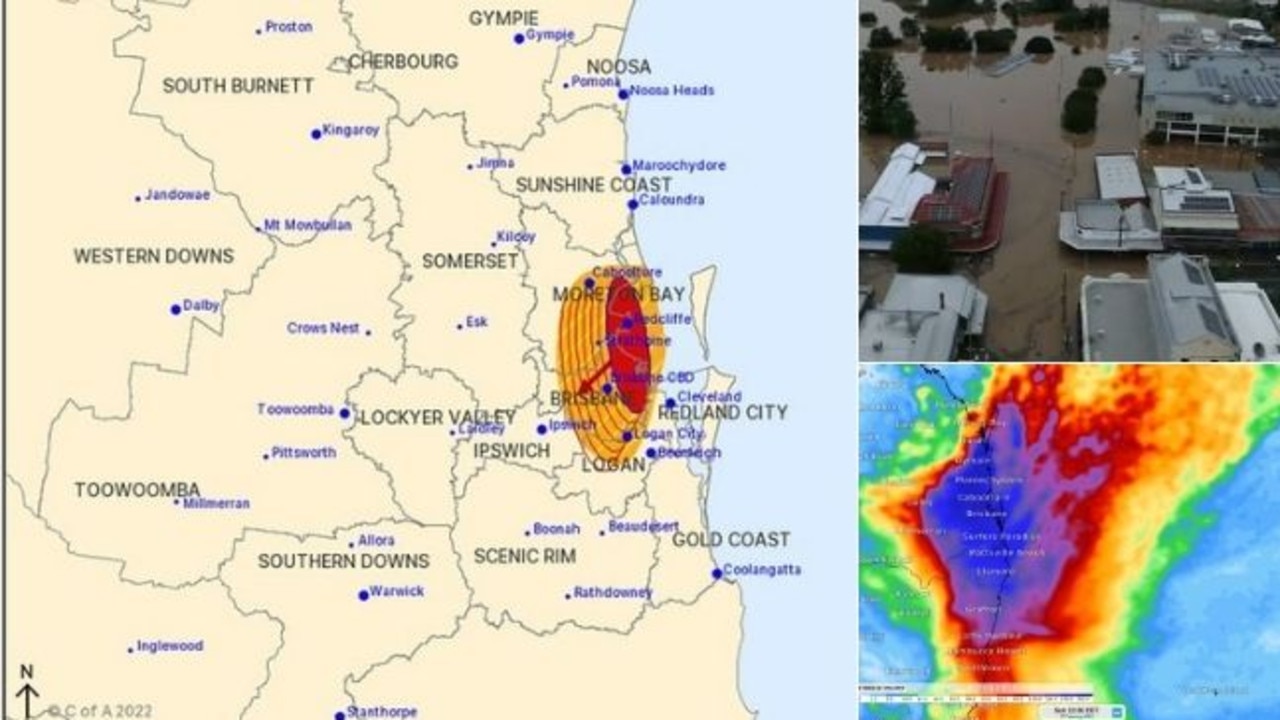 The Premier of Queensland has warned flooding will remain for at least another five days while saying a ‘rain bomb’ is hovering over the state.

The Premier of Queensland has predicted the horror floods will last at least another five days.

Annastacia Palaszczuk made the grim admission on Sunday morning as the death toll rose to six people.

“We did some releases from the dam (Wivenhoe). Now it takes about 24 hours to come down, so it’s not impacting (waterways) at the moment,” she said.

“With the rain abating hopefully over the next 24 hours, we expect to see high water levels in our river system for at least the next three to five days.”

Thunderstorms are expected to hit southeast Queensland on Sunday afternoon. In the past 24 hours, the SES has received more than 5,000 requests for help.

“We have some issues with Mount Crosby’s treatment system. May I ask people in the southeast to conserve water for the time being,” she said.

“Please save your drinking water.”

Brisbane Mayor Adrian Schrinneradrian said it was not yet as bad as the 2011 floods.

“What we are seeing unfolding in Brisbane at the moment is a combination of river flooding, riverine flooding and surface runoff all happening at the same time. Is a different situation than we saw in 2011 and that is exactly why people need to stay safe,” he said.

“At the Brisbane gauge of river monitoring levels, we see there was a peak this morning of around 3.1m. In 2011, that peak at the same location was 4.46m.

“It’s been defined as moderate flooding, but it’s continuing to cause damage in many parts of Brisbane and that’s exactly why people need to stay home.”

People were evacuated from their homes due to rising flood waters.

A Queensland Fire and Emergency spokesperson told the Courier Mail that seven rescues had been carried out in Monkland and Gympie.

Two rescue teams were called to the house at 9.50pm on Saturday evening with reports of someone trapped inside the house, which had water “rising rapidly up to the windows”.

Crews had to break into the house where they found a woman inside.

Prime Minister Palaszczuk described the amount of downpour as a “rain bomb”.

“There’s a rain bomb that’s just sitting all over the south east and as I said yesterday we’re used to it and south east Queensland is seeing a bit of rain over a certain catchment area it’s going produced throughout the southeast and its constant and like I said the other day, we thought it would subside,” she said.

“It hasn’t calmed down.”

In a statement released Sunday morning, the Bureau of Meteorology told residents to prepare for more severe thunderstorms.

‘Heavy rainfall with the potential to lead to flash flooding is expected to continue today in parts of southeast Queensland,’ he said.

“Six-hour rainfall totals of between 60mm and 120mm are forecast to continue, reaching up to 150mm over areas south-east from Caloundra to Warwick and contracting south to the NSW border today.

“Heavy rain increases the risk of landslides and debris on the roads. Devastating wind gusts of more than 90 km/h are possible on the coastal fringes mainly south of Caloundra and on the high ground of the Gold Coast hinterland.

Emergency services said they would resume the search for a 70-year-old boater who went missing on Saturday.

The search had to be suspended overnight.

On average, SES receives 100 support calls per hour in Queensland.

It comes as thousands of homes in Brisbane risk being destroyed as floodwaters continue to rise.

A potentially catastrophic combination of an early high tide and millions of megaliters of rain rushing down streams and rivers has put homes at risk.

Lord Mayor Adrian Schrinner said it could be the worst flooding in over a decade.

“For many Brisbane residents, this terrible bout of rain will bring back memories of the 2011 floods,” he told the Courier Mail.

“Our latest modeling shows that catchment flows and the potential for further discharges from the Wivenhoe Dam into the Brisbane River could combine with tomorrow morning’s high tide (and) this could impact thousands of residential properties.

High tide is expected around 7.30am on Sunday at the mouth of the Brisbane River. Council modeling showed a threat of flooding from more than 87 locations from north Brisbane towards Ipswich in the east and Logan in the south.

The city’s Wivenhoe Dam has started releasing water again, despite the fact that more homes are at risk of flooding.

The Courier-Mail reported that a car was found in flood waters in Indoorapilly around 2.45am on Sunday, before the body of a 34-year-old man was found in a nearby suburb.

Reports suggest the man attempted to swim from his vehicle onto Witton Road but did not surface.

During the deluge, Prime Minister Annastacia Palaszczuk urged residents to keep up to date with the latest news by checking information from the Bureau of Meteorology.

On Saturday afternoon, the bureau confirmed the huge amounts of rain that hit the state.

“A dangerous and ongoing weather and flooding event for south-east Queensland and north-east New South Wales – four-day rainfall of 1,360mm for Pomona and 709mm overnight at Mt Glorious,” he said in a statement.