Racing against the tide on Holy Island 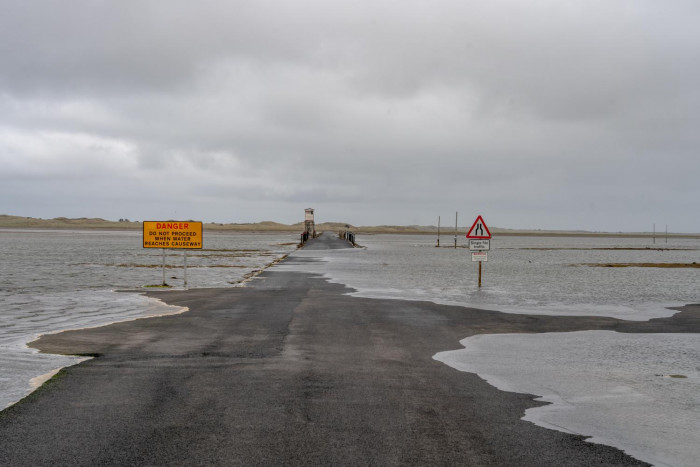 Racing against the tide on Holy Island

High tide begins to cover the causeway that connects Holy Island to the English mainland on August 16. ANDREW TESTA/nyt

The off-duty police officer was confident he could return to the mainland without incident, despite the islanders warning him not to risk the rising tide.

“No,” the officer reportedly said. “It’s just to scare off tourists.” 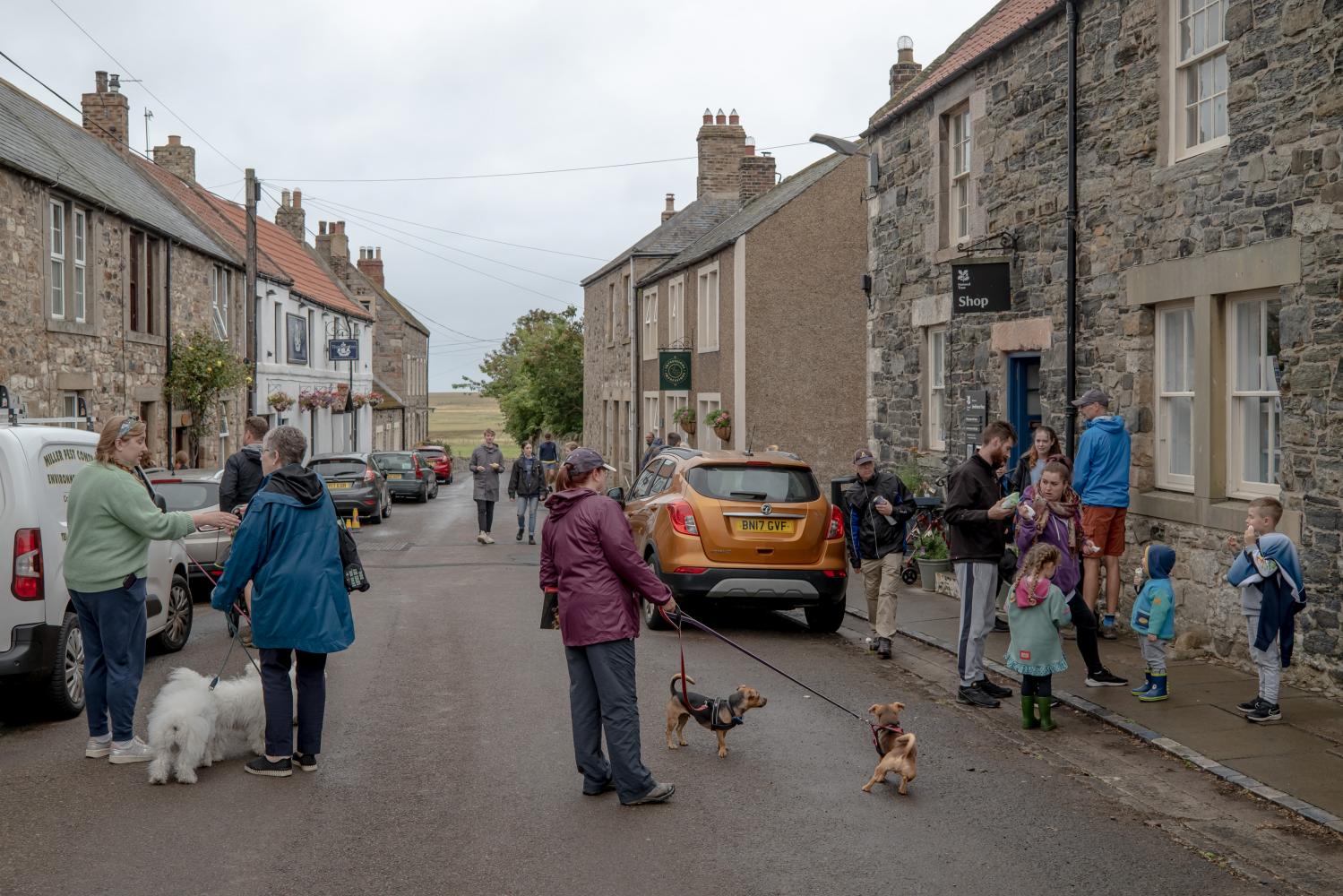 Tourists on Holy Island, which has only 150 inhabitants. ANDREW TESTA/nyt

About half an hour later, he was “standing on the roof of his VW Golf car with a rescue helicopter above him, with a lowering winch to bring him, his wife and child to safety”, said Ian Clayton, of the Royal National Lifeboat Institution, a non-profit organization whose inflatable lifeboat is often called upon to save the reckless.

Few events in life are as certain as the tide that cascades twice a day over the causeway that connects Holy Island to the English coast, temporarily severing its connection to the mainland.

Yet for some, it still manages to surprise. 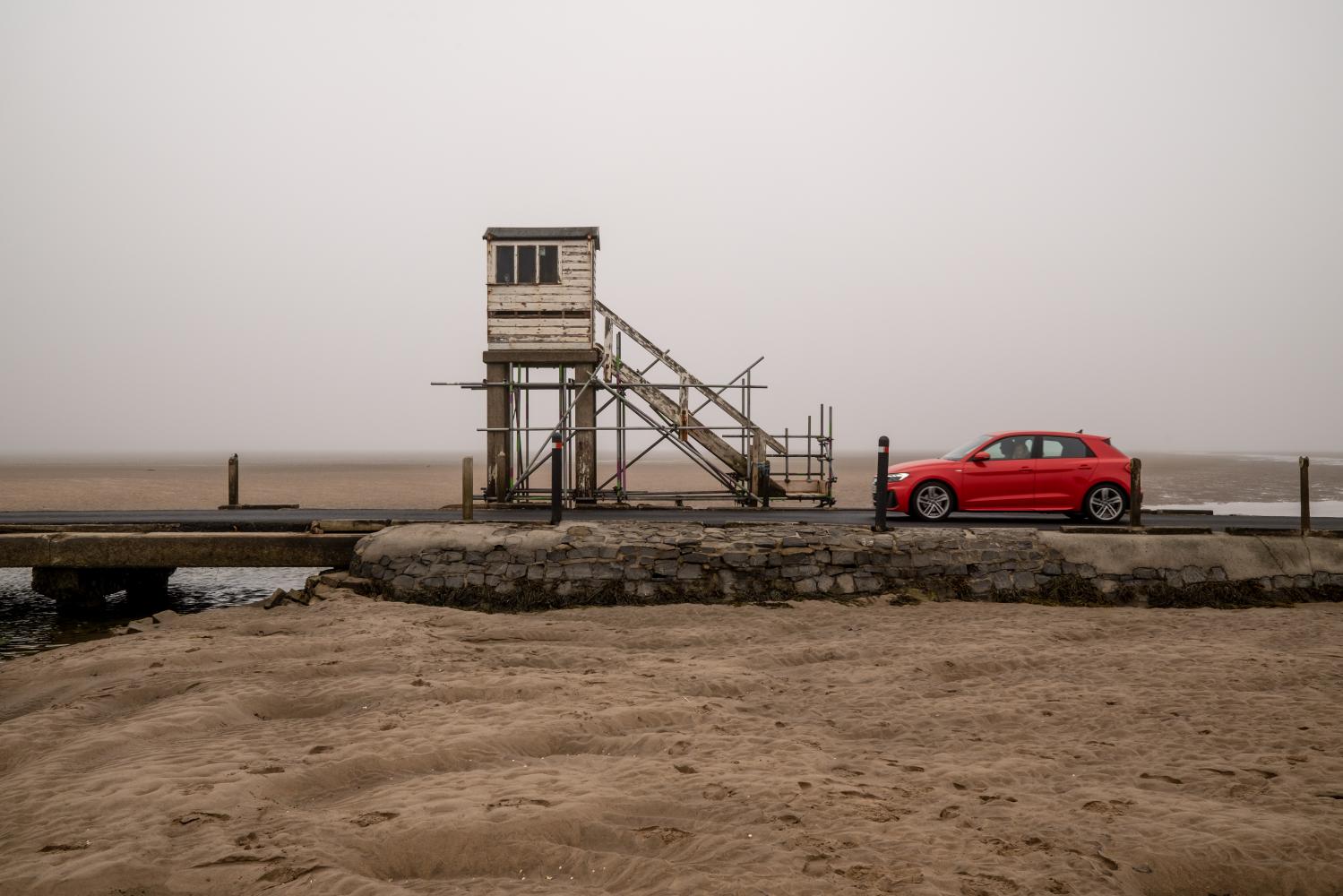 The security shack on the causeway between the mainland and Holy Island. ANDREW TESTA/nyt

A growing number of visitors are stuck in waterlogged vehicles on the 1.6 mile long road to Holy Island, also known as Lindisfarne.

Some manage to escape their cars and climb the steps of a safety hut perched above sea level, while others seek shelter from the rising cold sea waters of the North by climbing on the roofs of their vehicles.

Most feel a little stupid after passing a variety of signs, including one with a warning — “It could be you” — under a photo of a half-submerged SUV. 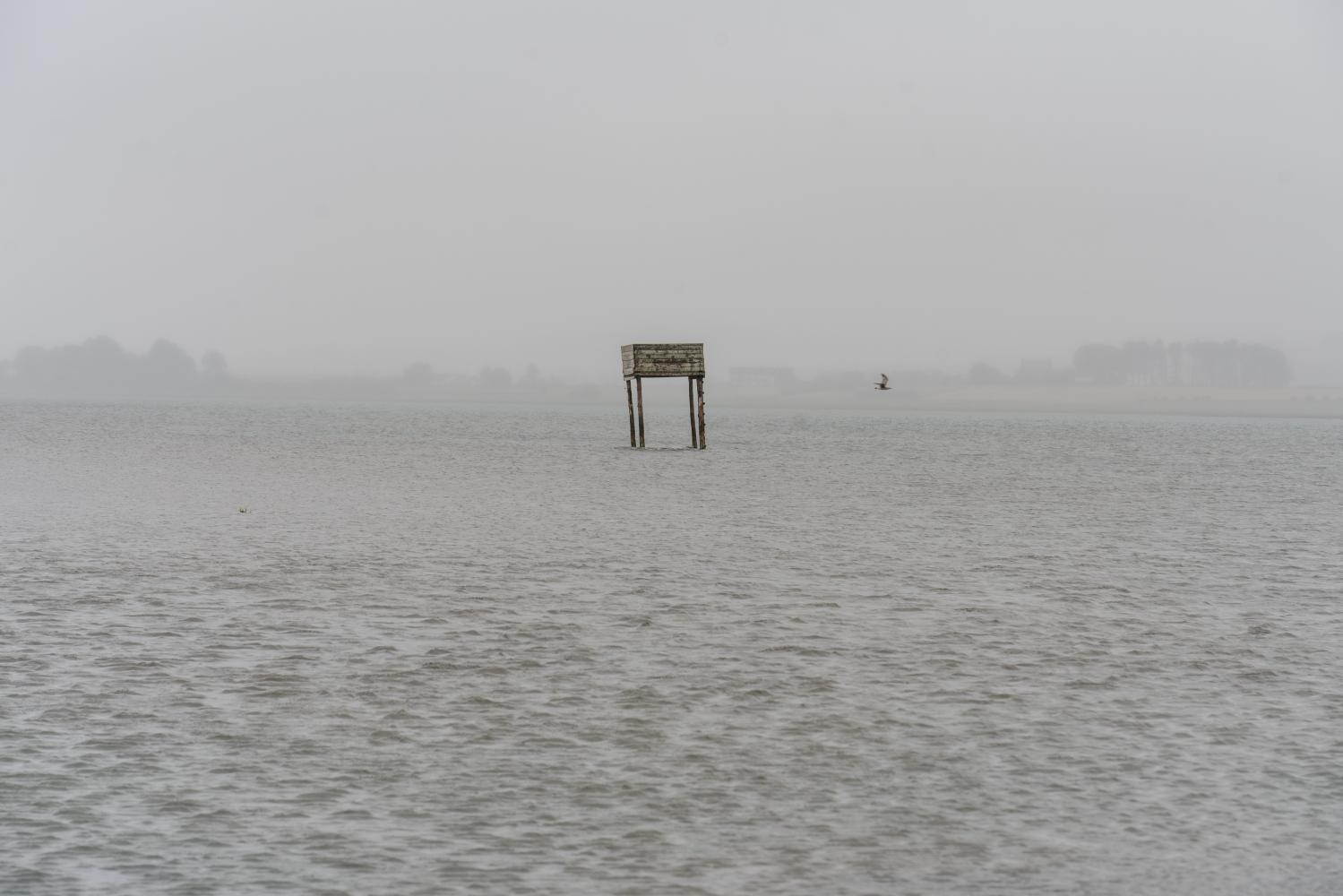 A safety hut on the causeway between the mainland and Holy Island is surrounded by water at high tide. photos: ANDREW TESTA/nyt

Although no one has drowned in recent memory, the growing number of emergencies is alarming for those responding to rescue calls. This is also a point of frustration.

“It’s so predictable: if you have a mid to late afternoon high tide, especially if it’s a spring tide, you can almost set your watch by the time your beep going to ring, asking you to go and fish someone,’ said Mr Clayton, standing outside the rescue station in the fishing village of Seahouses on the mainland and referring to the pager that alerts him in case emergency.

As well as the off-duty police officer rescued several years ago, others who were rescued from the tide of the causeway, Mr Clayton said, included a Buddhist monk, a senior from a Korean car company, a family with a newborn baby and the driver of a (thankfully empty) horse trailer.

The one thing they all had in common was their desire to visit a picturesque island considered the birthplace of Christianity in northern England. A sign that warns to check the tide times before crossing the causeway. ANDREW TESTA/nyt

Irish monks settled here in AD 635, and the eighth-century Lindisfarne Gospels – the most important illuminated manuscript in Anglo-Saxon England, now in the British Library – were produced here.

The ruins of a priory, with its spectacular rainbow, still stand, as does a Tudor castle whose imposing silhouette dominates the landscape.

When the sea recedes, birds feed on the soaked wetlands and hundreds of seals can be seen congregating on a sandbar.

Until the causeway was built in 1954, no road connected Holy Island to the mainland.

Although there are few statistics on the number of incidents (or rescue costs), Mr Clayton said that “this year we have seen more” – with three cases in a recent period of seven days.

He believes the increase reflects more holidaymakers staying in Britain to avoid disrupted overseas travel. Many live inland and are unfamiliar with tidal waters. 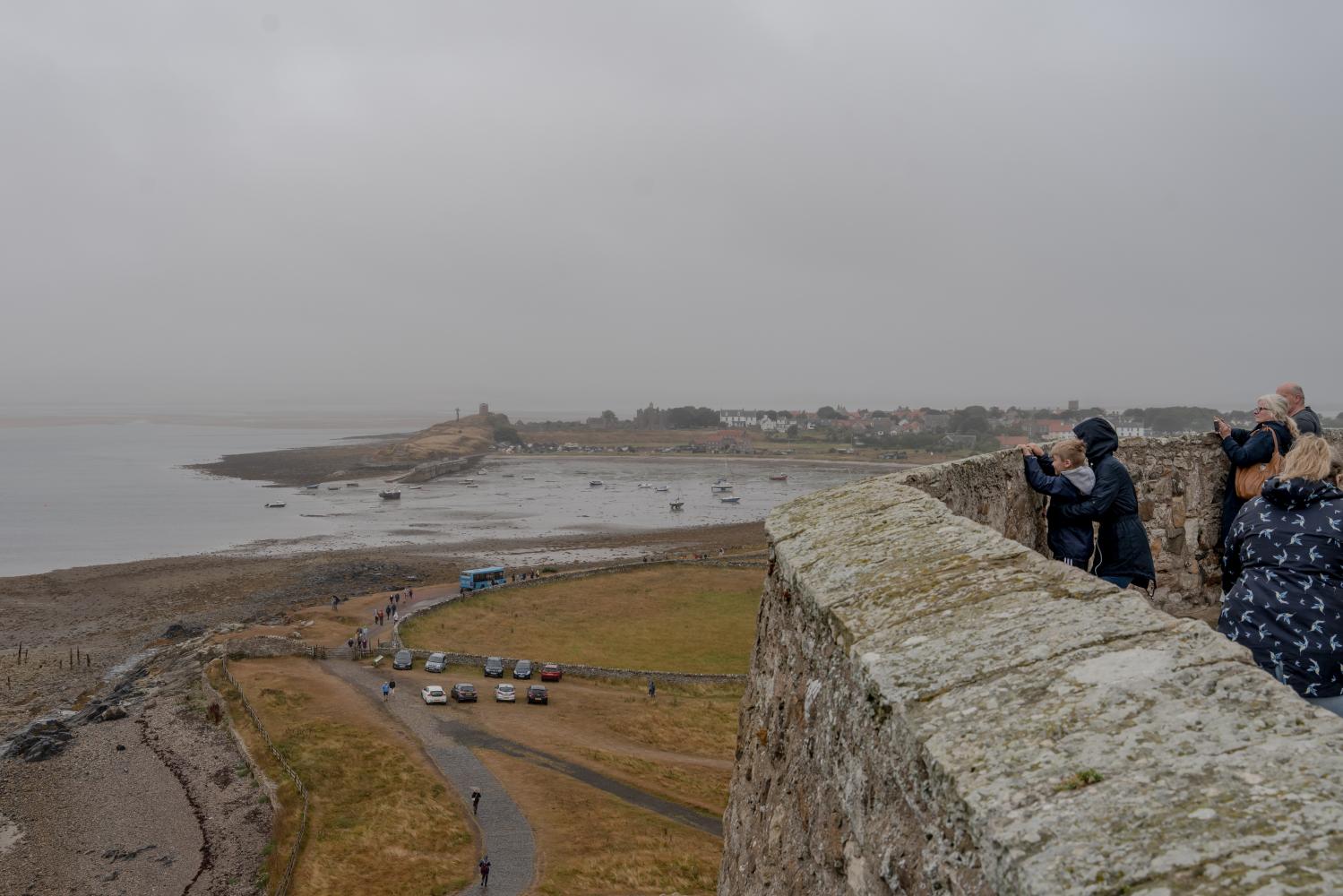 Tourists look out over the harbor from Lindisfarne Castle on Holy Island. ANDREW TESTA/nyt

At low tide, the causeway lengthens like a normal causeway set back from the waves, but, twice a day, the tar disappears quickly under a solid sheet of water.

“The risk seems really low because you can see where you are going,” said Ryan Douglas, senior coastal operations officer in Northumberland for the British Coast Guard, who is in charge of maritime search and rescue and often calls on the Royal National Lifeboat Institution. crew with his dinghy to help him.

“The water looks shallow,” he said, “but as you cross at about 400 yards it gets deeper and deeper.”

Sometimes those trapped have to be helped through open car windows. Recently, a vehicle began to float, so Coast Guard rescuers had to hold it down to prevent it from falling off the roadway and capsizing.

Walkers can also get stuck as they make their way to the island on the “Pilgrim’s Way”, a path traveled for centuries that stretches through sand and mud, marked by wooden posts. In May, a religious group of more than a dozen were rescued when some found themselves wading to their chests.

On the island beach with her family, Louise Greenwood, from Manchester, said she knew the risks of travel as her grandmother grew up in Lindisfarne.

“When the tide comes in, it comes in very quickly,” she said. “Some people think they can get by if they drive fast.” 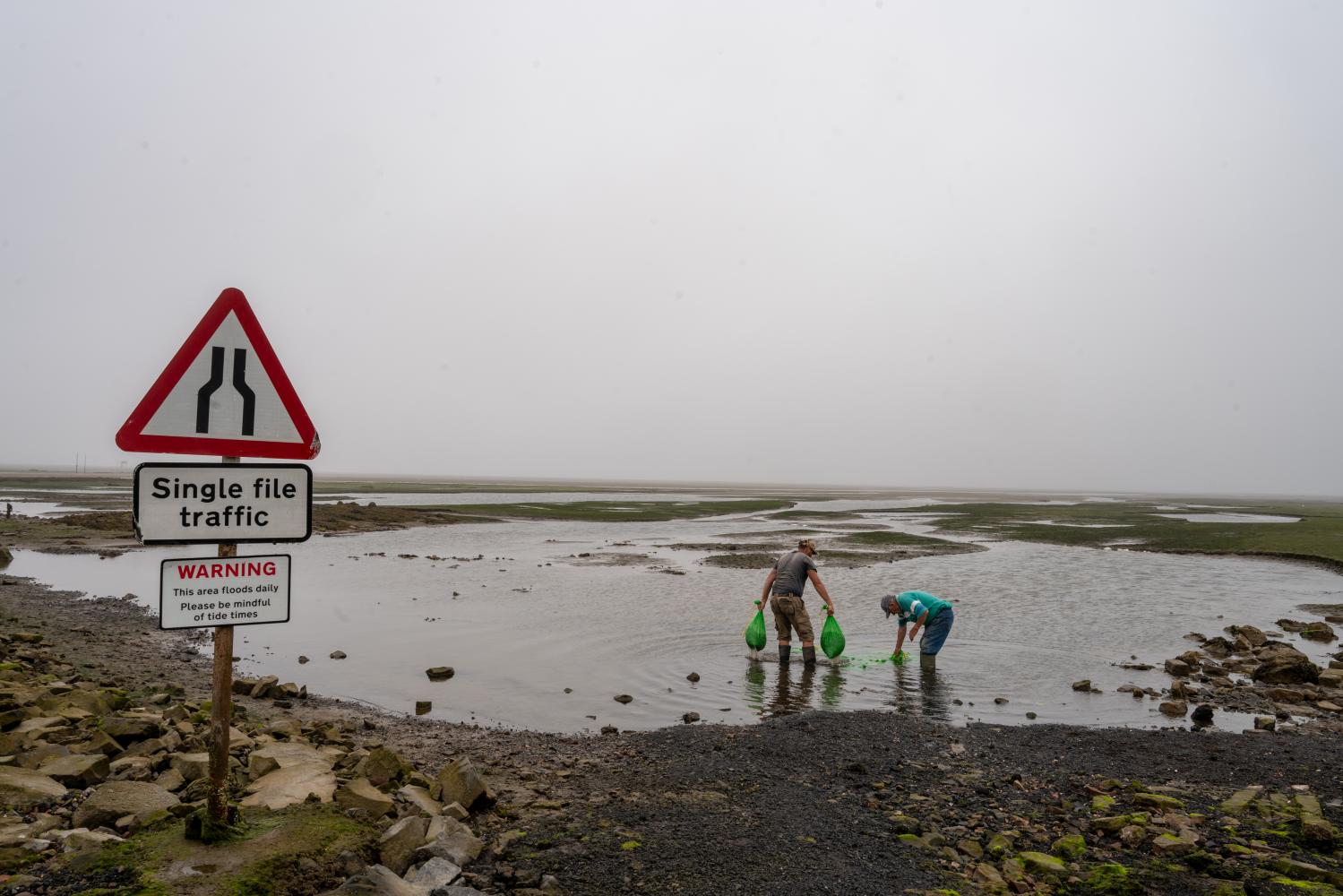 Fishermen collect shells from a pool of seawater near the causeway to the mainland on Holy Island. ANDREW TESTA/nyt

According to Robert Coombes, chairman of the parish council of Holy Island, the lowest level of UK local government, there has been talk of building a bridge or even a tunnel, although the cost, he said, “would be astronomical “.

Cheaper solutions were discussed, including roadway barriers. But islanders fear barriers could stop emergency vehicles when they could still safely cross.

So island life remains governed by the tides, which dictate when people can leave, said Mr Coombes, who arrived here with the intention of becoming a Franciscan monk but changed course when he met his wife. “You are a prisoner for part of the day,” he conceded.

Sitting on a bench on the island gazing at the imposing castle, Ian Morton, from Ripon in Yorkshire, said he was careful to arrive well before the last safe moment to cross. That afternoon, it was indicated that it was 3:50 p.m.

Authorities tasked with determining safe journey times are understandably erring on the side of caution, and on a recent morning vans could be spotted smoothly crossing the causeway 90 minutes before the tide was supposed to have receded to a safe distance. 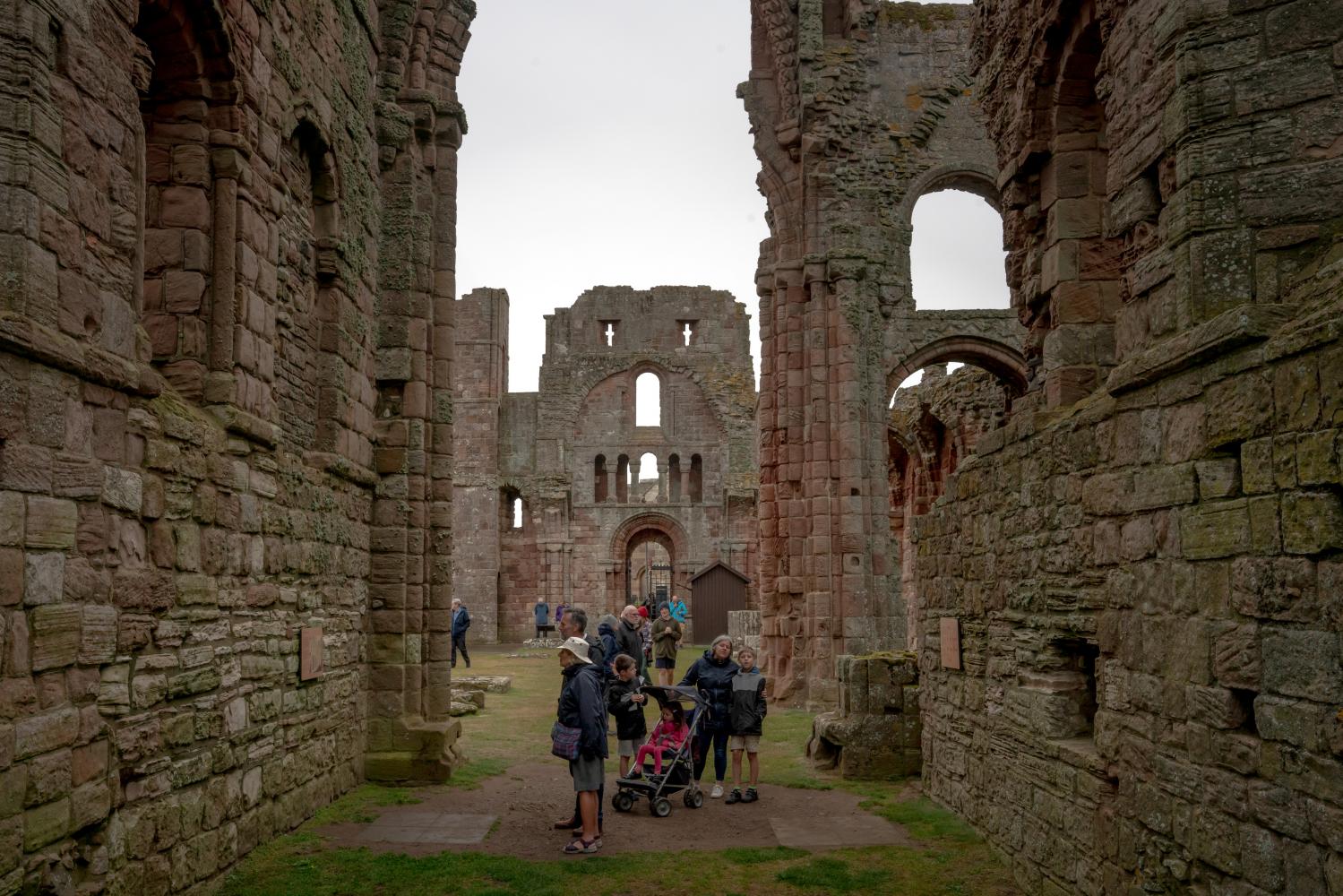 By profession, Mr. Morton is an internal auditor and, he joked, is therefore risk averse. But even he couldn’t help but ponder the dilemma that most likely lies behind many of the recent costly miscalculations.

“I’m pretty confident that at 3.51pm you could get through, but honestly I don’t know what time you couldn’t,” Mr Morton added.