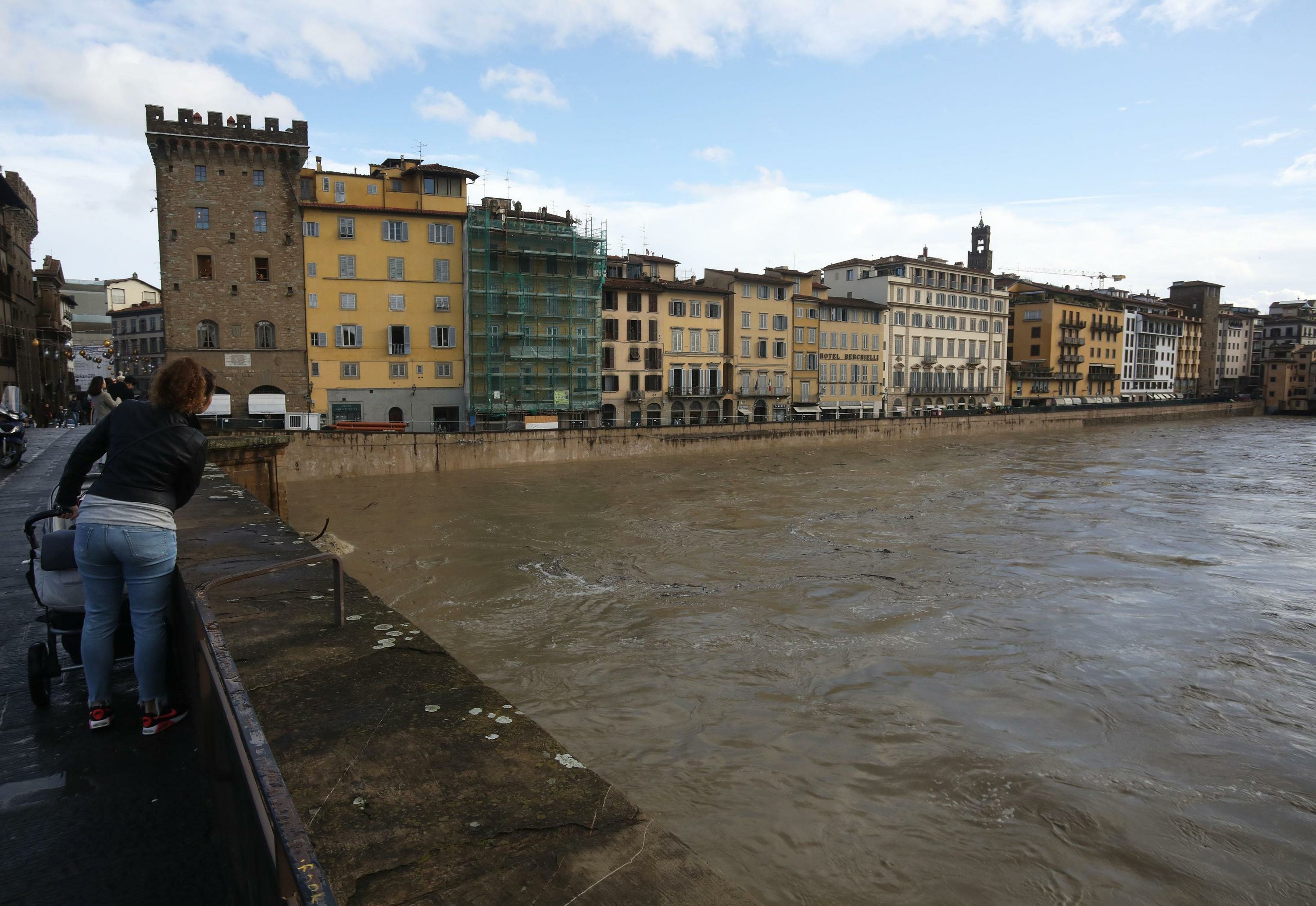 VENICE, Italy (AP) — Venice was hit on Sunday by a third record breaking tide in the same week while other parts of Italy grappled with a series of weather problems, from swollen rivers to rain to high winds to an off-season avalanche. .

Venice’s shops and museums were mostly closed in the hardest-hit area around St. Mark’s Square, but tourists donned tall rubber boots or even waders to witness and photograph the spectacle.

Most were disappointed when authorities shut down the historic square as winds rippled over rising waters. The gates of the famous St. Mark’s Basilica were safely closed to the public, and authorities took precautions – piling sandbags in canal-side windows – to keep the salt-laden water out. again in the crypt.

The Venice tide office said the maximum tide of 1.5 meters (nearly 5 feet) hit just after 1 p.m., but a weather front off the coast kept southerly winds out of the sea Adriatic to push the tide to the predicted level of 1.6 meters (5 feet, 2 inches). By early evening, the level was below one meter (three feet).

Yet it was the third time since Tuesday night’s 1.87m flood – the worst in 53 years — that the water level in Venice had exceeded 1.5 meters. Since records began in 1872, this level had never been reached even twice in a year, let alone three times in a week.

While Venetians had some relief, days of heavy rain and snowfall elsewhere in Italy swelled rivers to worrying levels, triggered an avalanche in the Alps and saw dramatic rescues of people unable to flee the rising waters.

In Venice, many shop owners in the upscale neighborhood around St. Mark’s completely emptied their stores, while others placed their wares as high as possible and relied on automatic pumping systems to keep water at bay. . At one luxury boutique, employees used wet vacuums and large squeegee mops to keep the brackish waters of the lagoon from advancing.

The mayor of Venice has assessed the flood damage at hundreds of millions of euros and the Italian authorities have declared a state of emergency for the region. They say Venice is sinking in mud and dealing with rising sea levels due to climate change.

Luca D’Acunto and his girlfriend Giovanna Maglietta watched the rising waters from a bridge, wondering how to reach their nearby hotel in their colorful but inadequate rubber boots.

“We made the reservation this week before the floods and we had already paid, so we came,” said D’Acunto, a 28-year-old Napoli. “Instead of a romantic trip, we will make it an adventurous trip.”

Most museums were closed as a precaution, but the Correr Museum, which overlooks St. Mark’s Square and explores the art and history of Venice, remained open. Tourists enjoyed a Venetian Spritz – a colorful aperitif with an Italian bitter and Prosecco – as the waters rose.

The flood has sparked new debates about the flood defenses of the city of Moses project, a corruption-riddled underwater barrier system that is still not operational after more than 16 years of construction and at least €5 billion ($5.5 billion) in public funding. It was supposed to work in 2011.

Floods also hit other parts of Italy on Sunday.

In Pisa, famous for its leaning tower, workers put sandbags on the road along the rise of the Arno River, which authorities said had reached the highest level there and in another Tuscan city , Florence, since 1992.

“I ask citizens to go home and stay there,” Pisa Mayor Michele Conti said in an appeal on state television. He said the bridges were closed as a precaution in case the Arno overflowed its banks. Offices and shops in Pisa were closed until Monday noon.

The Arno has also flowed through the historic heart of Florence, reaching a level near the Uffizi Galleries that has been described as the highest in two decades. In 24 hours, 6.26 centimeters (2.5 inches) of rain fell on Florence, which was whipped by winds reaching 76 kilometers per hour (42 mph).

A popular tourist attraction in Florence, the Boboli Gardens, has been closed as a precaution over fears of falling trees. Near the Tuscan town of Cecina, 500 people were evacuated when a local river swelled to the top of its banks.

Elsewhere in Tuscany, 2,000 people were ordered to evacuate in Grosseto as the Ombrone river grew dangerously large. Near Grosseto, firefighters rescued a man clinging to a tree as floodwaters surrounded him.

In the countryside outside Bologna, in the north-central region of Emilia-Romagna, an elderly couple were brought to safety by a helicopter when the Idice river burst its banks.

In Italy’s mountainous region of Alto Adige, or South Tyrol, a mid-autumn snowstorm caused power outages and blocked roads in several alpine valleys. Val Martello Mayor Georg Altstaetter told state television that an avalanche damaged two houses but left no one injured. Other homes were evacuated as a precaution in the town, which was left without electricity.

The region’s governor told people to stay home so teams could clear the snow-covered roads.

A windstorm overnight in the Rome area toppled dozens of trees, two of which fell on cars, seriously injuring a motorist.

Some politicians have lamented that Venice’s high tide drama is overshadowing the needs of other regions.

In Matera, a once impoverished southern city that has enjoyed a renaissance thanks to tourism, heavy rain sent torrents of mud through its streets last week, destroying shops and homes.

“There are no minor league regions,” said Luigi Di Maio, a populist who leads the 5 Star Movement, the main government party.