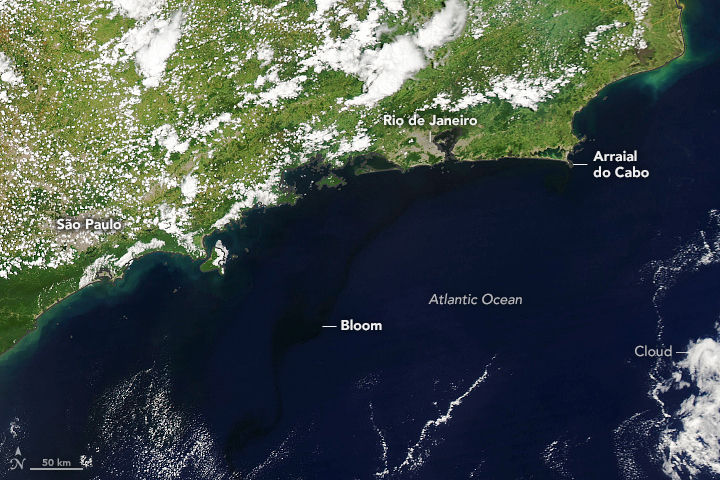 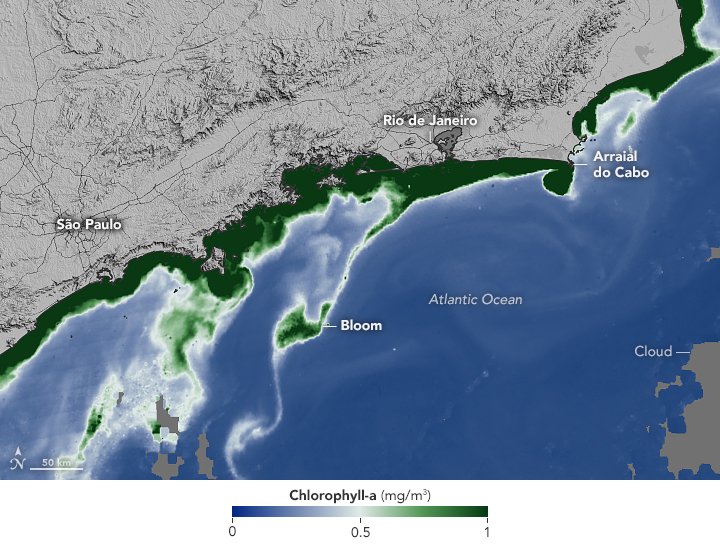 In late 2021, bathers in the Brazilian state of Rio de Janeiro faced unwanted visitors living in the ocean. Beginning in November, countless microscopic phytoplankton gathered along the coast, coloring the clear, blue waters a dark reddish-brown. The bloom, known as a red tide or a harmful algal bloom (HAB), was unusually widespread and long-lasting.

Phytoplankton blooms are common this time of year in Rio, but they usually contain species beneficial to the ecosystem. In contrast, harmful algal blooms can appear at any time of the year, usually stimulated by sewage effluents and heat waves; they tend to be small and don’t last more than a few days. This red tide event spanned over 200 kilometers of coastline and lasted over eight weeks. “It’s very worrying,” said Priscila Lange of the Department of Meteorology at the Federal University of Rio de Janeiro.

Some species in a red tide can produce toxins but, so far, these species have not been observed in the Rio bloom. Instead, Lange called the bloom “worrying” because of its likely impact on the marine food web.

From September to January of most years (spring and summer in South America), cool, nutrient-rich water gushes from the depths of the ocean off Arraial do Cabo, replacing the surface waters that have been pushed offshore by the winds and the Coriolis effect. The abundance of nutrients and sunlight on the ocean surface triggers blooms of diatoms and other phytoplankton, which are quickly consumed by zooplankton and fish larvae. Ocean currents push upwelling water masses west toward the city of Rio de Janeiro, and the warm, blue water off Rio generally turns cold and dark green.

Spring 2021 was unlike most years. Lange and his colleagues believe that six weeks of cloudiness and rain hampered the usual growth of diatoms and small flagellates, leaving the waters off Rio transparent and overflowing with nutrients. When the skies finally cleared in early November, abundant sunshine and low turbulence set the stage for the red tide. “Once there was light, red people – dinoflagellates, Mesodinium rubrum, etc.—Bloomed like crazy! said Lange.

The change happened quickly. The first visual observations of red tide were made on November 3, then confirmed by water samples taken from a beach in Rio on November 16. The water off the beaches of Rio quickly turned very dark and a red scum formed.

In early December, the red tide reached Arraial do Cabo and “clouded the waters of Rio’s most pristine scuba diving paradise,” Lange said. Satellite images from Dec. 5 show red-brown water stretching the length of the coastline between the two towns.

In late December, the bloom faded but remained visible to NASA’s Aqua Satellite Moderate Resolution Imaging Spectroradiometer (MODIS), which acquired these images on December 26, 2021. The bloom appears in the natural color image (at left) like a faint, dark whirlwind of water stretching away from the coast. An even fainter patch is visible to the left of the vortex. The bloom is more distinct in the false color image (right). In this view, shades of green represent concentrations of chlorophyll-a, the primary pigment used by phytoplankton to capture sunlight. The darkest shades of green show the areas with the highest concentrations of chlorophyll.

Lange and his colleagues will continue to observe the flowering progress. But even after a massive bloom subsides, the effects can be long-lasting. After the phytoplankton die, the process of decomposition by bacteria can deplete the water of oxygen (hypoxia) and cause the death of fish. Additionally, red tide species can replace other species of phytoplankton that typically support a region’s fish and marine food webs.