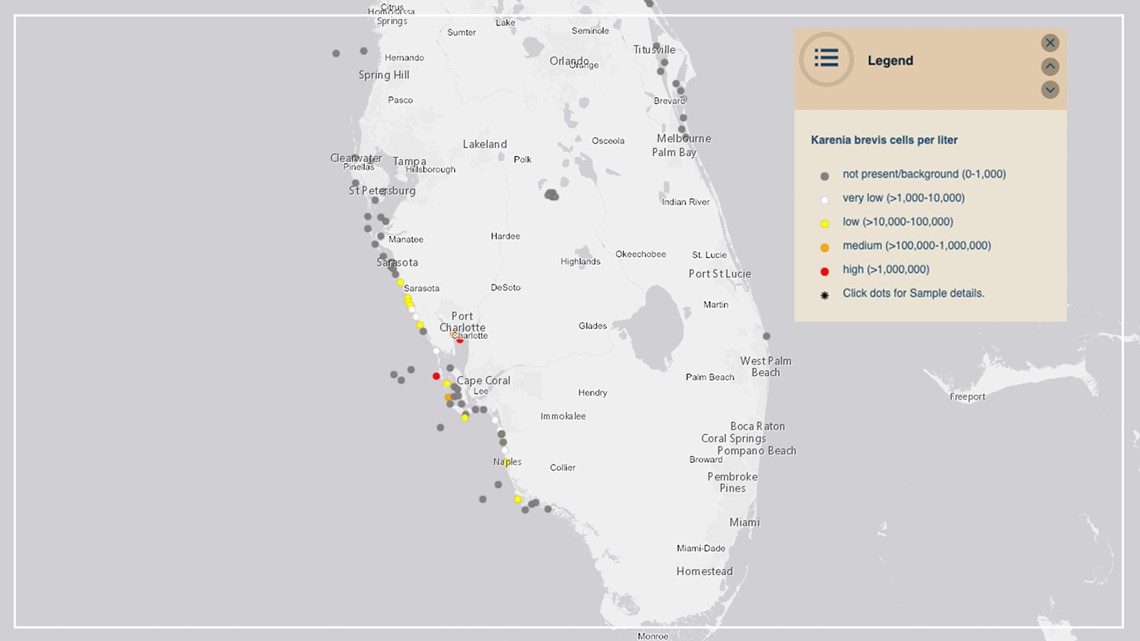 SARASOTA, Florida – Red tide is an unusually persistent harmful algal bloom in our water caused by Karenia brevis, a type of algae that produces powerful neurotoxins.

It can be deadly to marine life. Toxins can also become airborne near beaches and cause respiratory disease in humans.

FWC has measured high levels at times around Ft. Myers in Naples since December 2020, resulting in fish kills and odors along some beaches. High levels of red tide were reported today by FWC just west of North Captiva Island in Lee County.

No one who lived around Tampa Bay in 2017-2018 will forget the historic red tide event that killed fish, sea turtles, manatees, birds and dolphins. This drove people away from the beaches and also hurt local businesses.

The worst part of this red tide event lasted 15 months from November 2017 to January 2019.

FWC tells 10 Tampa Bay that they have no way of predicting the red tide very far in the future, or how far or if it will move from current locations, as it depends on weather and currents.

NOAA says that red tides in Florida can last as little as a few weeks or more than a year. In 2005, for example, a bloom began off St. Petersburg in January, then spread from there to Pensacola and Naples in October, persisting for most of the year.

The duration of a bloom depends on the physical and biological conditions that influence its growth and persistence, including sunlight, nutrients, and salinity, as well as the speed and direction of wind and water currents.

So far, FWC says samples from Pinellas and Manatee counties have not contained red tide.

You can check daily red tide numbers across the state here.