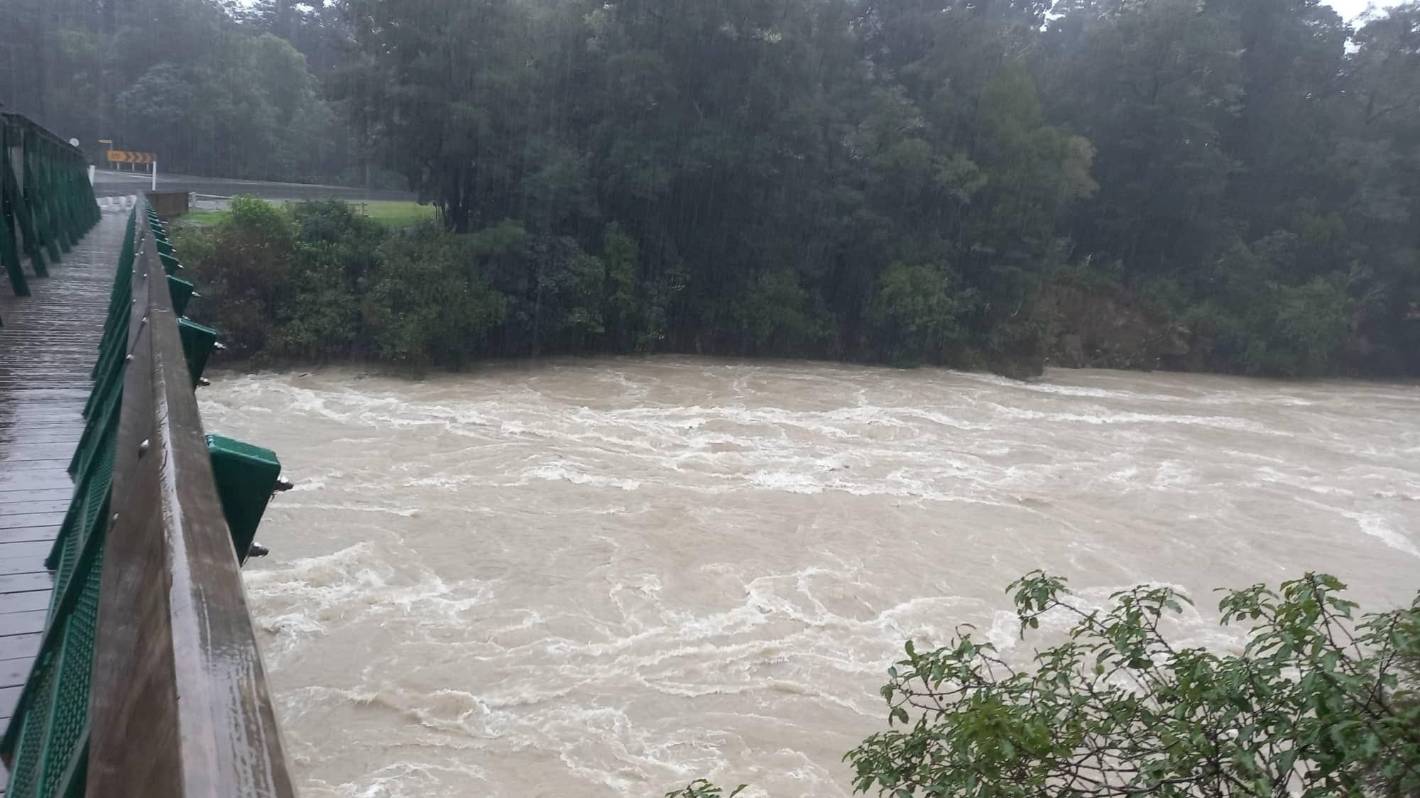 “The warning systems were really good,” Knight said. “People have had time to prepare.

“The mood in general is pretty good, people are resilient and they heeded the warnings this time. it’s going to be a big event, and we’re going to have to do something about it.”

His tavern, The Millers Rest, had remained open overnight in case people needed supplies, and a civil defense worker was on standby. Some stranded truckers had gone to bed for the night.

Rai Valley, midway between Blenheim and Nelson, received 542.4 millimeters of rain on Wednesday and Thursday at Rai Falls, according to Marlborough District Council’s rain report. Tunakino to the northeast was 740.5 mm.

The heavy rains caused the rivers to rise to levels local residents had never seen before, with the Te Hoiere Pelorus River rising almost to bridge level at high tide.

Knight said that was unheard of. The river was normally several meters below the bridge.

Rai Valley farmer Ruthie O’Sullivan said she had lived in the valley for 32 years but had never experienced rain of this magnitude.

“We’ve been here 32 years and seen some decent flooding, but this rain is something else…it doesn’t stop!” said O’Sullivan.

Heavy rains in the Bryant Range behind Rai Valley Township rolled down the hills and quickly filled the river. High tides were a concern as they prevented rivers from flowing normally. The next high tide was at 1:51 p.m. Friday.

However, most of the houses were on high ground and the rain and flood waters had eased somewhat overnight.

A fire crew was heading for resident wellness checks on Friday morning. Knight said he knew of a few households that packed up and self-evacuated Thursday night as floodwaters rose, but the brigade was not called for emergency relief overnight.

With the highway closed on either side of the Rai Valley, residents were stuck.

However, two people were able to be medically evacuated on Thursday, one woman by rescue helicopter and another was flown to Havelock to meet an ambulance.

Marlborough Lines worker Owen Soper was dispatched to Rai Valley on Tuesday to check the network ahead of the storm, but rain fell and he got stuck.

“We’ve just been locked down here with all the road closures.”

Soper and his colleague Samuel White were staying at a lumber camp in Rai Valley.

“It’s fine here, but there has been some flooding in a few of the houses in the Rai Valley itself, so we’ve been working with the fire department to try and get the water out of the houses and keep them safe. a bit of flooding when we have some free time and we don’t keep the power on.

“We probably saw a dozen houses with water and the room in Canvastown had a meter of water in it.

“High tide actually makes a huge difference, it’s really crazy how much it affects it even so far inland.”

“We’ve been stuck here for two nights but the community has been really good, they’ve huddled together like they do here. We went out on Tuesday, and we kind of knew we could get stuck here, but we had no idea it was going to be that bad, we thought we could get out if we wanted to, but here we are. We can’t wait to get home, ay.

Are you affected by the floods? Email [email protected]

Knight said he felt for the farmers who were already dealing with the very wet winter and now had a flood cleanup to go through.

“Now they’ve got broken fences, washed out irrigation systems, and we’re in the middle of calving… There’s a definite risk to calves, you definitely lose a lot more calves in weather like this when they become born in puddles,” Knight said.

His thoughts were also with the fire crews who responded to the severe flood damage in Nelson, particularly the professional brigades who plan to strike on Friday afternoon. “We are behind them and we support what they are fighting for.”

“Both lanes just disappeared and you can see for 20m by 10m more that the pieces are all cracked.”

Havelock resident Robin Blake said the estuary near his house was very full, overflowing onto the western end of Queen Charlotte Drive and partly submerging an island in the middle of the estuary used for farming.

However, he had seen the flooding of the estuary worsen in previous years, he said.

His neighbour, Roger McClimont, said it had already been a very rainy month and if he hadn’t spent the last few weeks pumping rainwater from his property, his house could have been flooded this week. It was the lowest house on the edge of the estuary.

Pebbles from the seabed have accumulated in the estuary over time, making it shallower and blocking the floodgates, he said.

Images of the flooding by the Nelson Marlborough Rescue Helicopter Trust.

MetService still predicted 140mm to 190mm of rain accumulating on the beaches and 70mm to 110mm elsewhere. The predicted heavy rains could lead to more surface flooding and landslides, as the ground was already saturated.

“It will impact the local community and infrastructure systems, and unfortunately there is more wet weather ahead.”

Kieran McAnulty announced $200,000 to go to the Mayor’s Fund for Nelson Tasman for immediate relief.

Emergency Management Minister Kieran McAnulty said on Thursday the government would make an initial contribution of $200,000 to the mayor’s relief fund to help the communities of Nelson/Tasman and Marlborough.

“My heart goes out to everyone who has been impacted by severe weather across the country in recent days,” McAnulty said.

“The weather conditions caused extensive damage and were extremely disruptive. This has been all the more difficult for the communities that are still cleaning up after the last bout of heavy weather.

“While it is too early to know the full cost of the damage, this initial $200,000 contribution to the Mayors Relief Fund is a start and will help ensure there is minimal time to get immediate support to those in need. .”

SH63 Renwick in St Arnaud will close at 7pm on Friday. The reopening will be appreciated on Saturday morning.

Motorists were urged to exercise caution on the roads and to avoid non-essential travel.

People have been advised to heed weather warnings and keep an eye out for MetService website or app.

For more information on preparing for a flood, please visit: https://getready.govt.nz/en/emergency/floods/