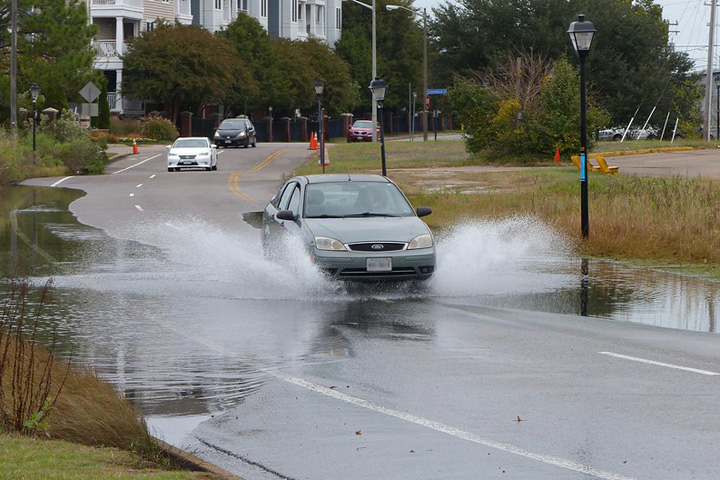 The third annual “Catch the King” event – when trained volunteers hit the shores of Hampton Roads to map the range of the year’s highest astronomical tide – took place on Sunday morning, and although the range of the tide may not have been as “majestic” as it has been in recent years, the data it offered citizen scientists was still just as valuable.

Derek Loftis of William & Mary’s Virginia Institute of Marine Science, Chief Scientist for Catch the King, said, “A southerly wind, delayed precipitation, and offshore movement of the Gulf Stream caused our model to predict less floods than some of our volunteers might. have seen at previous events or even in recent weeks. But, he notes, their water level measurements will continue to play an important role in improving Street level flood model from VIMS: “The data will help verify the impact of atmospheric factors on predicting flood levels,” says Loftis.

Water levels during Sunday’s royal tide were almost a foot lower than they were in mid-October, when a vivid example of ‘sunny weather flooding’ impacted the bay of Chesapeake due to the combined effects of an offshore northeasterly and seasonal high tide. “Comparing the data collected by our volunteers during these two events will help us better understand how non-tidal factors like wind, rain, and ocean currents affect our model’s flood predictions,” says Loftis.

Karen Duhring, a Loftis colleague in the Coastal Resource Management Center at VIMS, has been active in training Catch the King volunteers and was impressed with this year’s turnout, especially given the forecast for a rainy and windy morning.

“While the tidal level was not extreme or impressive,” says Duhring, “the level of energy and data collection efforts of nearly 300 citizen scientists certainly were.”

Catch the King – the brainchild of former Virginian-Pilot journalist Dave Mayfield, Skip Stiles of local non-profit Wetlands Watch and Loftis – is designed to raise awareness of coastal flooding and rising sea levels by donating participants a first-hand glimpse of a disturbing reality: Over the next few decades, regular high tides will be as high as today’s annual “royal tides”. while the royal tides will reach heights only seen in storms.

“We care about high tides because they herald what’s to come in decades to come,” Mayfield says. “They are a window to that future.”

Participants in “Catch the King” collect their data using the free app “Sea Level Rise” developed by Stiles in conjunction with Concursive, a Norfolk-based software company. Phones in hand, these “King’s Assistants” walk along the waterline near high tide, pointing a “GPS pin” every few strides to mark the extent of the tidal flood.

“The app allows us to easily map the entirety of Hampton Roads,” says Loftis. “This year, nearly 300 volunteers collected over 35,000 GPS points and 218 geotagged photos for geospatial comparison across Tidewater Virginia, allowing us to validate our model across the region.”

Street Level Flood Model from VIMS is based on data from water level sensor network to predict the time and location of coastal flooding on Hampton Roads – from the wide shores of the Chesapeake Bay to the narrowest tidal creeks.

Loftis uses data collected during Catch the King and other flood events to validate model predictions through careful, cell-by-cell comparison of predicted and observed water levels. He says: “We take the GPS values ​​from the app and the 1.2 million individual grid cells from our model, and compare the time series of what was observed and what was predicted. We then use any discrepancies to help improve the model.

Loftis even created a tool that allows Catch the King participants to self-check validation. “We built an online map that allows people to measure between any of their points and what our model predicted as the maximum flood extent,” he says. “They can use the online measurement tools to see in feet any difference between what they recorded as the high water mark and what the model predicted.”

The differences usually don’t stem from a problem with the physics the model uses to simulate water level changes, but from inaccuracies in the elevation data. Although LIDAR technology — which uses aircraft-mounted lasers to map ground height — has greatly improved elevation maps in Virginia and around the world, certain types of terrain still pose problems. “LIDAR can’t see through thick forest cover, or under bridges, or through culverts,” says Loftis, “so we need people to visit these hotspots in person.

Loftis says that’s where Catch the King’s media partners — The Virginia Pilot, Daily Press, WHRO and WVEC — play a particularly important role. “We’ve been collecting data since 2014 using the Sea Level Rise app,” he says, “but without media support everyone tends to go to the only place they experience flooding – The Hague in Norfolk, for example Our media partners are key in letting people know not to collect data only in places where we already know there are problems, but that they need to expand to areas where model validation is most needed.

Duhring validates the success of this communication effort in 2019. “Our volunteers,” she says, “expanded our coverage area by mapping the Middle Peninsula, North Neck and East Coast to document how flooding affects rural areas. as well as urban areas, such as Norfolk.

Ian Cheyne, one of twelve Master Gardeners from the Northern Neck Chapter to volunteer for this year’s event, says: “We covered about 500 yards of beach at Hughlett Point and spots on Dymer Creek and the River Rappahannock. We had a great time and everyone is excited to start over and get more people involved.

Although this year’s Catch the King event has already taken place, the Sea Level Rise app is available anytime through the Apple App Store and Google Play, and training sessions will continue to prepare users for future high tides and storms.