Turning the tide against climate change 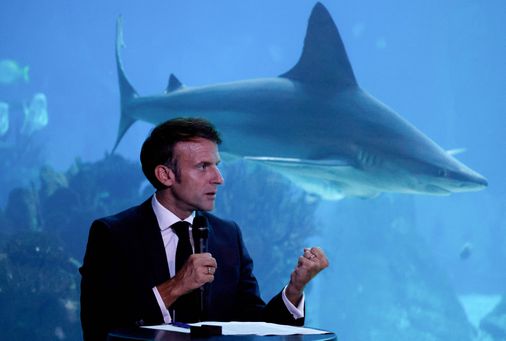 Turning the tide against climate change

And it could potentially do much more, if we help it, but only if we do it intelligently and carefully.

Get Weekend Reads from Ideas

A weekly newsletter from the Boston Globe Ideas section, forged at the intersection of “what if” and “why not”.

Last month, I led a delegation from the Woods Hole Oceanographic Institution to Lisbon and the United Nations Ocean Conference, the highest-level international gathering of world leaders in government, science, advocacy, ocean-focused finance and philanthropy. What we heard in Lisbon was a clear call to action: we must act now, and we must act decisively.

But there was also another theme that we heard loud and clear. Around the world, people are increasingly turning to science for answers. Ocean science can help ensure the long-term sustainability of global society, possibly by using the solutions that the ocean itself offers us.

We don’t have all the answers, but it’s a mantle that science must shoulder to identify our options for mitigating climate change, assess their effectiveness and understand their impacts. Ocean science is taking the lead in determining whether we can and should pursue the options outlined in a recent report by the National Academies of Sciences, Engineering, and Medicine on so-called “Carbon Dioxide Removal.” of oceanic origin. These include strategies such as adding nutrients to key locations in the deep sea to stimulate phytoplankton growth, making seawater more alkaline to combat ocean acidification, growing algae to consume carbon dioxide, as well as protect and restore coastal ecosystems such as salt marshes. and mangroves. All of these can help replicate and enhance natural processes and reduce greenhouse gases in the atmosphere. These become even more important now that the Supreme Court has limited the Environmental Protection Agency’s ability to regulate carbon emissions, although they cannot replace emissions reductions.

As part of these efforts, our institution is studying the development of what we call an Ocean Vital Signs Network, which would equip a volume of ocean roughly twice the size of Texas and up to 5,000 meters (3 miles ) of depth containing an unprecedented scale of oceanographic moorings, autonomous free-swimming underwater vehicles, drifting floats and sensors, and other cutting-edge technological innovations, all focused on scientific documentation of how the ocean absorbs and stores carbon .

In addition to leading a new era of deep ocean discovery and exploration, this network would also be an important test bed, where scientists could implement carefully designed and monitored experiments to determine the effectiveness and impact of large-scale carbon dioxide removal concepts. It would also help support the continued growth of the blue economy – industries and jobs that depend on the ocean and a market that is growing twice as fast as the economy.

Another repeated message we heard in Lisbon is that science must act with caution and humility in developing solutions. The ocean is our planet’s life support system and everything we do must respect this vital role it plays. During the meeting, two members of our team presented a code of conduct to guide scientific research on removing carbon dioxide from the atmosphere by stimulating the growth of phytoplankton. This meeting has given us and many others, including members of the American Geophysical Union, the world’s largest professional society of Earth and space scientists, a roadmap for making converge our efforts and guide future research.

Our path will not be easy, but Lisbon has given us the opportunity to take the first steps. Now is the time to help change the ocean narrative and consider leveraging the size and power of the ocean to help us turn the tide against the climate crisis.

Peter de Menocal is president and director of the Woods Hole Oceanographic Institution.