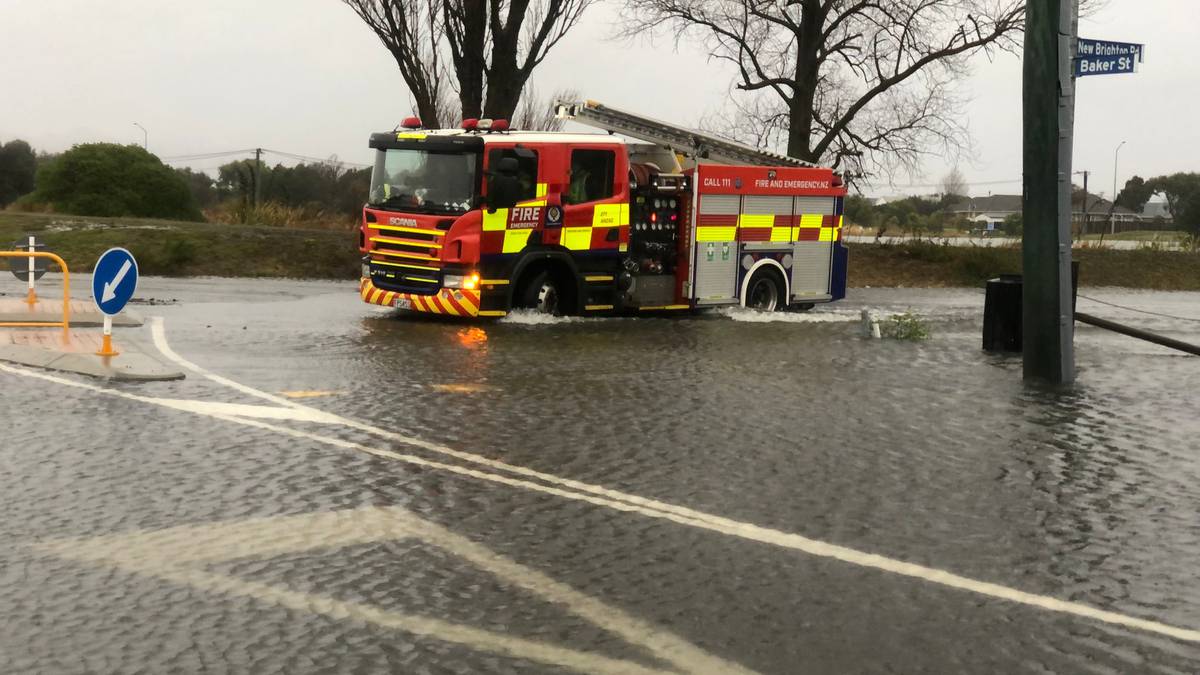 The Heathcote River in Christchurch has breached its banks and local authorities are warning that the next high tide will bring further flooding to the city.

MetService has put in place a code red warning – its highest alert level – for Canterbury as the deluge is expected to bring up to 400mm to the high country by late Monday morning.

The rain has started to cut off some areas and make roads impassable, and people living near Ashburton in particular have been urged to keep a close eye on the situation and watch for updates.

A state of emergency has already been declared in the region.

The Heathcote River in Christchurch has ruptured its banks by Clarendon Tce, and a number of streets in central Christchurch are closed due to severe flooding.

In a statement this morning, the council said most of the roads that were closed this morning are likely to remain closed until the high tides pass tomorrow.

“So if you normally take these routes to get to work or school, please start thinking about other means of transportation.”

The council also urges people to drive slowly if they have to be on the road, so that water is not pushed onto people’s properties.

People are advised to avoid walking or cycling in surface water as there is a risk of it being contaminated with sewage.

Christchurch City Council spokesman Tim Drennan said the flooding is expected to subside over the next few hours as the tide recedes, but the next high tide will bring further flooding.

“Most of the flooding we have experienced so far is related to high tides.

Until 8am this morning, Christchurch and the Port Hills received between 40mm and 60mm of rain. Parts of the Banks Peninsula received nearly 100mm. Rain is expected to continue today and tomorrow.

Ashburton activated its Civil Defense Emergency Operations Center and residents were told to boil their water.

At this point, no evacuations have been ordered, but Garcia said contractors are assessing the damage and residents have been advised not to venture out today.

Rivers in the upper reaches of these watersheds were flowing very high, with gauges registering some of the highest volumes on record, and more rain was falling.

“We are already seeing water coming out of the rivers above the roads, so there are places that are already starting to be cut off and bridges that cannot be used.

“We expect to see more overflow throughout the day as all of this water begins to move down the catchment system. And if these gauges are true, they will push the design capacity of the flood protection system. as it goes down the system.

“In particular, these are the northern and southern branches of the Ashburton [River]; tributaries, the main ones being the Taylor’s Stream and the Bowyer’s Stream.”

McCracken said field staff were watching the rivers and his team was in contact with Civil Defense teams.

People should monitor their situation, and if they saw something that wasn’t right, “make safe decisions,” he said.

Deputy Mayor Liz McMillan urged people to stay home and stay safe. She said the council sends updates via text and messages on its Facebook page.

More rain to come for Canterbury

A warning has also been issued for strong south-easterly winds today on the Canterbury Coast, north of Ashburton.

Christchurch, the Eastern Plains and coastal areas of Canterbury are expected to receive between 100mm and 140mm of rain during the three-day deluge.

Canterbury south of the Rangitata River

Flooding is expected south of the Rangitata River in the lower parts of Geraldine near the Orari River, in the Arowhenua region, and between Geraldine and Temuka, including around the Hae Hae Te Moana and Kakahu rivers, the official said. Canterbury Regional Council.

During the night, significant amounts of rain fell in the region – between 150 mm and 180 mm.

As of 9 a.m., the Orari River was flowing at around 500 cubic meters per second and still rising, and rivers around the Temuka region were at capacity, but closely monitored.

Water cannot be drawn safely, so the water supply has been shut off in these areas.

Surface flooding in Christchurch knocked out power to hundreds of homes throughout the morning.

Around 240 homes around Bishopdale went dark just before 5.30am today but were restored later this morning.

Nearly 80 homes in Woolston went without power overnight but restored it this morning. And more than 2,000 homes near Lake Ellesmere were briefly without power around 2am.

Further inland, about 80 homes went dark around Springfield at 4 a.m.

A Fire and Emergency spokesman said they received calls reporting flooding on the roads overnight, particularly on roads next to rivers in Christchurch and near rivers in the Canterbury Plains.

They have also had to deal with downed trees and expect to receive more calls about damaged trees.

State Highway 73 from Springfield to Castle Hill in Canterbury has been closed due to slides and flooding, NZTA Waka Kotahi said in a tweet.

SH79 between Fairlie and Geraldine has also been closed, and people are advised to use SH8 as a detour.

Motorists have been urged to delay their journey between Christchurch and the West Coast as the closure of SH73 means a long detour via SH1 and SH7.

Canterbury can sign up for official Canterbury County Council flood alerts, including evacuation advisories, free of charge by texting the name of their local river to 3730. must be entered in capitals. The other rivers for which these alerts are available are: Ashburton, Hinds, Pareora, Rakaia, Waihao, Waimakariri and Waitaki.